A few weeks ago, when Samuel Delany (“please call me ‘Chip'”) and I were at a gathering of friends at Michael Swanwick‘s and Marianne Porter“s home, he explained why he feels that spelling “black” with a capital “B” is racist. As is always true, Chip’s discourse was fascinating, keeping us spellbound. There and then, I knew I would want to record him on the subject.

So, here he is, helping me launch my new video interview series which shares its name with this blog: “What If? Why Not? How?”

Of course, the conversation went much further that the original, delving into the history of how the word “black” replaced “Negro” and “colored.” Chip also wandered his memories, telling me stories about W.E.B DuBois, the Delany sisters (Chip’s renowned activist aunts), Ursula K. Leguin, and others. And he commented on the public censure and ostracization of Mercedes Lackey when she described Chip as “colored” while on a panel at a SFWA conference. As always, Chip’s perspective is illuminating and his anecdotes fascinating.

About Samuel Delany: Chip is an influential social critic and teacher, as well as an award-winning author, whose books, stories, and articles cover the gamut from science fiction to essays. His website is SamuelDelany.com and you can follow him on Facebook.

About “What If? Why Not? How? The Video Series”: In this new video interview series, Sally Wiener Grotta dives into topics that matter with people whose ideas are intriguing and whose style of inquiry includes seeking open-ended discussions. These will include authors, of course, but also philosophers, scientists, rabbis and ministers, teachers and librarians, and so forth.

A few months ago, I wrote an essay for the Science Fiction & Fantasy Writers of America (SFWA) FWAFicWritblog which was inspired by reading Samuel R. Delaney’s The Atheist in the Attic.

Novelist as Poet or Philosopher?

I am reading Samuel Delany’s book The Atheist in the Attic very slowly, a few pages every morning, so that I can savor individual gems of ideas through the day, usually latching onto a single concept that resonates for me, makes me think, wonder, question. This morning I’ve been fixating on the above quote, and on various paths of thought where it has lead me.

The Atheist in the Attic is a “fictive reconstruction” of a meeting between the philosophers Gottfried Wilhelm Leibniz and Baruch de Spinoza, told from Leibniz’s point of view. Clearly, philosophy is the subject. But as I read the section quoted above, I immediately applied it to writing fiction. In particular, what drives me to write stories and novels.

I write to understand. My characters and plots are formed in a subconscious that churns with confusion or concern about how the world functions (or fails to function). As I write the story my characters tell me, I… (To read the rest of this essay, please go to the SFWA blog.) END_OF_DOCUMENT_TOKEN_TO_BE_REPLACED

This past weekend at Readercon was filled with great conversations, superb author readings, interesting panels and the inevitable hijinx. I’m still going through pictures that folks have sent me of my readings, panels and friendly gatherings. Here are a few.

I’m very much looking forward to attending Readercon this week. The drive up to Quincy, Massachusetts will be great — with Samuel R. Delany and Dennis Rickett. However, we’ll miss Tom Purdom who won’t be joining us this year, and especially Gardner Dozois who has left this earth. Then, we’ll have a weekend dedicated hanging with friends (old and new) as well as interesting conversations, panels, author readings and opportunities to learn from each other.

If you’ll be in Quincy, Massachusetts for the conference, here’s my schedule:

END_OF_DOCUMENT_TOKEN_TO_BE_REPLACED 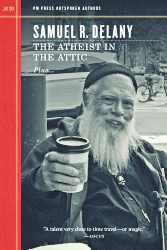 My short essay “Novelist as Poet or Philosopher; Meditation Inspired by Samuel Delany‘s The Atheist in the Attic” was recently published on the SFWA blog (Science Fiction & Fantasy Authors of America).

The Atheist in the Attic is a “fictive reconstruction” of a meeting between the philosophers Gottfried Wilhelm Leibniz and Baruch de Spinoza, told from Leibniz’s point of view. An intriguing read, it sent my mind in a variety of different direction. At one point, I took a discussion of the differences between a poet and a philosopher and considered how it might apply to different kinds of novelists. I’ve decided that I’m essentially a philosopher; no surprise there. As I wrote in the essay, “I write to understand. My characters and plots are formed in a subconscious that churns with confusion or concern about how the world functions (or fails to function). As I write the story my characters tell me, I find myself posing questions that [as Delany wrote in The Atheist in the Attic] “reflect and even explain the differences and forces that relate them all… hold them together… or tear them apart.”

Please read the essay here, and let me know what you think. What kinds of authors do you prefer to read — poets or philosophers, as defined by Delany’s book? And if you’re a writer, are you a poet or philosopher… or something else?