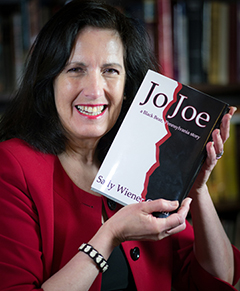 On June 4th, I appeared at the Jewish Book Council annual conference, to speak about my novel Jo Joe to an audience of book club leaders from around the country. (I’ll be uploading a video soon). It was an exciting opportunity, one that I prepared for over several months, writing and rewriting my short speech. Joyce Lit of the Jewish Book Council, who mentored me through the process, was a big help. But I balked when she suggested that I end my talk with “I’ve discovered over the years, that I write with a photographer’s eye and photograph narratively, seeking the details of a moment, the visual impact of a gesture, the humanity that captures our hearts and confounds our minds.”

“Isn’t that a turn-off?” I asked. “Ending my talk with an ‘I’ sentence?” Then, before she could answer, I added, “Is that a very ‘woman’ type question to ask?” She immediately understood the implied question: “Would a man hesitate END_OF_DOCUMENT_TOKEN_TO_BE_REPLACED