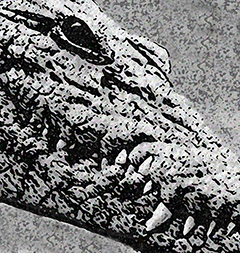 Daniel and I enjoyed strolling. Wherever we were, whether near home or on some other continent, we’d go for rambling walks. Often with no destination in mind, turning where our feet and curiosity pulled us, stopping when something demanded our full attention, or to simply sit and absorb. It was our way of connecting. With our surroundings, whether it were nature or a cityscape. With the rhythm of life and culture. With each other. Every walk was an adventure, an exploration, a learning experience. And fun.

More often than not, I’d have a camera in hand. When we were away from home, Daniel usually carried my camera bag, which would be packed with lenses, various camera bodies, model releases and the other paraphernalia that fill such bags, including dozens of rolls of film. (Yes, this was in the pre-digital era.)

On this particular walk, the sun slanted on the arid sub-Sahara of Kenya’s Samburu National Park. Golden light and long shadows mottled the parched landscape, creating unexpected shapes where I had seen only a flat and near featureless expanse in the midday overhead sun. Dotting the far flung vista were occasional groves of trees, indicating probable water sources.

Our only companion was our guide. Unlike the lanky statuesque men of the local Samburu tribe who moved through their domain with the graceful lope of a gazelle, our guide was compact, with a center of gravity that seemed to keep him in constant contact with the earth under his feet. The air was alive with almost subliminal sounds that I couldn’t really identify — probably bird calls, perhaps insects and far off animal calls. The sky above was as wide as any I’ve ever seen, stretching from horizon to far horizon, devoid of any sign of mankind’s imprint on nature. No wires, no buildings, no vehicles or sounds of traffic. Not even the contrail of a high altitude plane.

As we rounded the edge of a comparatively large grove of trees, we saw a small river which had carved a crevasse in the dry soil so that the embankment seemed to tower over the waterway like a tiny cliff. At the bottom of the near embankment slept an enormous crocodile. He was motionless, a stunning sculptural figure composed of dense shadows and pools of light. END_OF_DOCUMENT_TOKEN_TO_BE_REPLACED