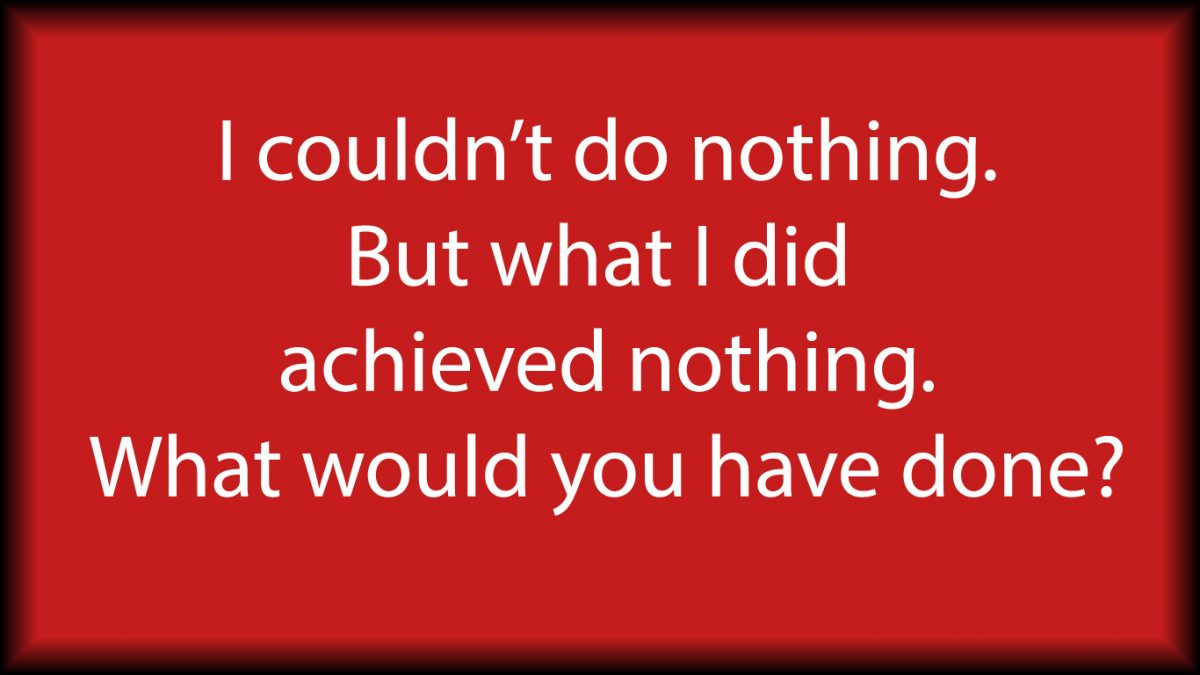 The other morning, Shayna and I went for our usual first walk of the day. The air was soft and light, with a slight breeze that was caressing rather than chill. A couple of neighbors said hello, with a smile for Shayna, as they passed us on their way to their day ahead. I was pleased that Shayna is learning to be much calmer around strangers, though sometimes her fears erupt, memories, I suppose, of having been an abused puppy.

Up until the moment that I turned the corner toward Pennsylvania Avenue, I was feeling wide open, ready to embrace the blue-sky day and all that it might offer. But as I reached the intersection of Fairmont and Pennsylvania Avenues, I saw on the opposite corner a person ensconced in a red hoodie, sitting motionless in a wheelchair. His (?) her (?) their (?) head had dropped to his chest. Her arms dangled on either side of the steel wheels.

That intersection is almost always alive with activity. It’s where Philadelphia’s beautifully landscaped Benjamin Franklin Parkway meets Fairmont Park. At the nexus between the parkway and the park is the Acropolis-like Philadelphia Museum of Art, with the Azalea Garden and Boat House Row stretching behind it. Joggers and bikers, busloads of tourists posing with the Rocky Balboa statue at the bottom of the museum steps, parents with baby carriages, children running and playing, lovers of all ages strolling hand-in-hand or arguing, and people like me walking their dogs were mixed in with the usual city morning commuters of adults rushing to work and kids headed for school.

All those people walked past the stranger in the wheelchair. I did too.

Like any city, we have our share of homeless people, and this area’s greenery, park benches, woods, and even a railroad tunnel that provides some shelter from the elements is a magnet for them. It’s wrong that we’ve become accustomed to seeing them in our lives, but I don’t know what I can do to help them that they would want from me. So, I walked past the stranger, hoping he was sleeping and not sick or overdosed or dead.

But when I looked back at her, he had slumped over, head hanging over knees. I changed Shayna’s and my usual route, veering away from the Azalea Garden to turn toward the Parkway, so I could keep her in sight while we walked.

I told myself that she has a right to privacy. But doesn’t he also have a right to proper care if she’s in trouble?

What if he needed help, as my niece had when she died of a fentanyl overdose a few months ago? A shot of Naloxone might have saved her life. Did people walk by my niece, slumped on some sidewalk, while her life slipped away?

But what could I do for the stranger? I had Shayna with me, and she doesn’t respond well to new things and strange people. A nervous barking dog coming close to him certainly wouldn’t be welcomed interference. Besides, I must admit a part of me was fearful, knowing that a percentage of the homeless have emotional problems that make them aggressive. A couple of months ago, Shayna and I were out on our afternoon walk, when suddenly a woman became almost violently angry at me for glancing in her direction.

Would this stranger in the wheelchair be similarly angry if I dared to invade his personal space?

But how could I live with myself if I did nothing, and that stranger in the wheelchair was deathly ill?

I dialed 911, recognizing that it was a privileged middle-class woman’s answer to too many things. I was relieved when the person who answered agreed that the proper response would be to send an ambulance rather than the police.

For his report, he asked me questions, none of which I could answer. Is it a man or woman? With the red hood draped so far over his/her/their head, it was impossible to say. What’s the age of the person? No idea. Any markings? Even his hands were covered by the long red sleeves. To all appearances, she could have been a life-sized ragdoll inside those all-encompassing clothes.

All I knew was that a defeated human being was hidden under there. Possibly in pain, possibly in danger.

Shayna was so good during that walk, heeling beautifully by my side, sitting whenever I stopped, even though I wasn’t giving her the full attention she is used to from me. These walks are our private time together, to enjoy life around us and each other. But she must have sensed my concern because she never once tested the limits of her leash, not even when squirrels called her to the chase.

I watched from afar as the ambulance arrived, relieved when I saw the two EMTs approach the stranger in the wheelchair gently. One squatted down next to the wheelchair, then carefully pulled back the red hood, and checked for a pulse. The stranger still didn’t move or raise his/her head, though apparently the EMT was able to solicit some response. I can never know what they said to each other. Soon, the two EMTs returned to their ambulance and drove away. When Shayna and I came inside, the stranger in the wheelchair was still on the corner, slumped over, the red hood once again shielding him/her/them from prying eyes.

Daniel and I used to run with our local all-volunteer ambulance corps as first responders. So, I know that the stranger had the right to refuse assistance. Even if he were at death’s door, she has the right to choose to not do anything about it. And I respect that right.

I hope that he was simply tired, and used to sleeping wherever she found herself, including on the corner of a busy intersection. I resent that I live in a society in which that might be considered the best-case scenario in this situation.

I can’t stop thinking about the stranger in the wheelchair. I’m haunted by the way she wore that red hoodie, retreating so far back into the fabric that he didn’t have to deal with anything or anyone. Such a fragile barrier, against what, I can only imagine. And my imagination is taking me to some very ugly, dehumanizing places. Not that this experience is about me and my discomfort with her hard existence. I have a safe comfortable home. Heck, my dog has a better life than that stranger, because Shayna is loved and valued.

A dear friend who was formerly homeless has told me that he avoided the shelters, because they were scenes of frequent theft, violence, and sexual assault. No wonder so many people choose to live on the streets or in the woods rather than seek charity shelter. Again, that is their right.

But don’t they also have the right to a decent life, with proper medical support and a sense of security and selfhood? How can such a wealthy country built on the ingenuity and backs of millions not care enough to provide for and protect the vulnerable among us? How dare we throw away human beings who might have difficulty functioning in our modern society? How dare we walk past them, not seeing them?