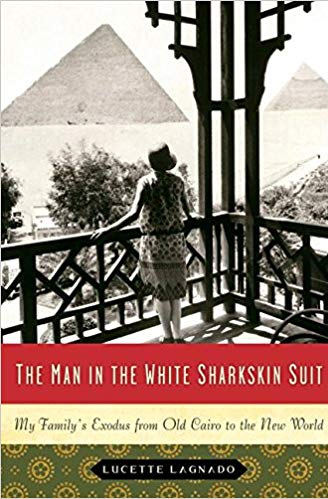 Some time ago — certainly more than a year — a good friend suggested I read The Man in the White Sharkskin Suit by Lucette Lagnado. My friend Tom has impeccable taste in books, music and… well just about anything. So, I immediately bought the book and put it on one of my shelves among the many other to-be-read books in my library.

Let’s face it; one of the facts of a bibliophile’s life is that her library contains an inordinate number of books she is looking forward to reading. (And, of course, she has a library rather than a home, where every spare wall is covered with bookshelves, and scores of overflow books are piled next to her bed, on her kitchen table, in her bathroom and just about everywhere else.)

I’m delighted to say I finally got around to reading Lagnado’s memoir this week. Tom was right; it’s an elegant and eloquent work that absorbed me with its personal poignancy and fascinating universality.

Depending on where the mutable borders were drawn at the time of various births, my mother’s family were Austrian or German Jews who came to the United States in the late 1800’s. My father’s parents were Russian Jews who arrived from the village of Cherkas in the province of Kiev in the early  twentieth century. Neither of my grandmothers would have recognized the food, clothes or customs of Lagnado’s Egyptian Jewish family. Yet, The Man in the White Sharkskin Suit touched me not only as a particularly timely story about the American immigrant experience, but also for the resounding Jewish undertones that were so very familiar and yet exotic.

The first half of the book recreates the glamour of post-World War II Cairo, where the Lagnado family were among the privileged elite. I became thoroughly involved with the personalities of the family. Zafira, the mother-in-law who ruled the home and especially the kitchen, was like grandmothers of every culture. Her ancient concoctions of spice, meat, legumes and especially apricots were the glue that held the family together. But she thoroughly intimidated Edith, her son’s unworldly bride who loved books and understood little else. Salomone, the handsome, kind cousin, and then the author’s older siblings filled the elegant home with youth and the belief in an entitled glorious future. And at the core, standing above and beyond everyone else, was Leon, the eponymous man in the white sharkskin suit, the bon vivant groom, father, and mysterious entrepreneur who partied late every night in Cairo’s glittering nightclubs, then awoke early every morning to pray at synagogue. Lucette Lagnado was the youngest, the “princess” of the family, her father’s closest ally, but born too late.

When Lucette Lagnado was six years old, their world ended. King Farouk was exiled, the nation’s new leader Nassar nationalized industry, and all who were perceived as colonialists were  thrown out of the country. Jews whose families had lived for generations in Egypt were forced to flee their homeland. Suddenly, the Lagnado family was penniless, refugees dependent on charity. They washed up on Brooklyn, by way of Paris, but the older generation never quite made the transition… especially Leon who, to the end, clutched his frayed red prayer book, and dreamed of someday returning home.

Lucette Lagnado recreates both the splendor that was lost and her family’s eventual destitution with a clear eye and well-crafted prose that sidesteps sentimentality. Her grandparents, parents and siblings are finely delineated individuals, about whom I learned to care deeply, warts and all. The Man in the White Sharkskin Suit is a book I’ll remember for a long time to come. Thank you Tom, for insisting I read it.