A few years ago, Daniel and I were writing profiles of prominent professional photographers for Lexar Media’s Website SayCheese.com (which has since been discontinued). They were feature stories about the photographers’ philosophy, style and adventures, with some tips and tricks thrown in. The pieces were a delight to do because of the people we got to spend time with and watch at work.

At the time, I was at a trade show party (I think it was PhotoPlus in New York City), when someone said, “You absolutely must profile… [name withheld to avoid his embarrassment]” for SayChesse. I didn’t know the photographer being recommended, but he happened to be present at the party, just on the other side of the room. So I went over to him, introduced myself, and asked him what he shoots. His reply was an energized discourse about his camera equipment. When he finally took a breath, I smiled, told him how nice it was to meet him and walked away. Daniel and I never wrote a profile on him for SayCheese or any other publication.

Back in the 1980’s, I was one of the first pro photographers to embrace digital cameras. I took a lot of flak for it, especially among my peers at ASMP (American Society of Media Photographers), where I was a chapter president. But eventually, my fellow members all wanted to talk to me digital photography. But their focus tended to be about were CCDs and pixel depth and lens falloff and color management. I was happy to provide the information they needed, but I really would have preferred to discuss and debate photography with them. 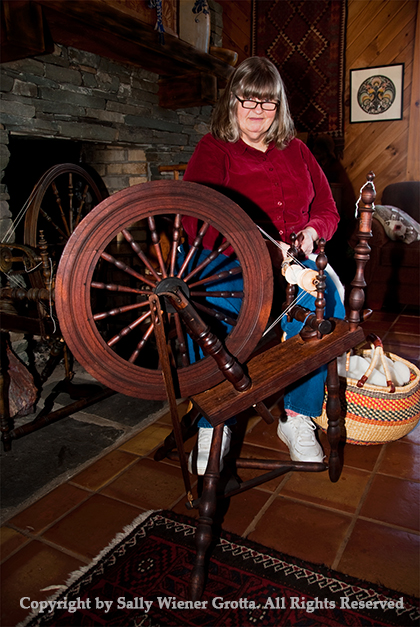 As time passed, this split between my tech expertise and my art became a stumbling block for some people, particularly as word has spread about my American Hands portrait project. To many – at least, for those who don’t know me well – the project appears to be a contradictory digression, maybe even a deviation. To paraphrase some of the comments I’ve heard, “What the heck is someone known for her expertise in technology doing focusing her attention (and her camera) on tech-shunning artisans who do things the old-fashioned way?”

But those who know me understand.

First of all, the artisans I’m featuring in American Hands aren’t tech-shunning. Nor are they anachronistic. Take Grace Hatton, who spins wool from her own sheep into yarn, which she then knits into clothes. Yes, Grace happens to be a member of the Society for Creative Anachronism. However, like all my other American Hands subjects, Grace communicates with me via email or phone and enjoys all the usual conveniences of modern life. In other words, the whole point about American Hands is that these are highly talented individuals who live in our very real, very tech world, but they choose to pursue traditional skills in the age old way – using their hands and minds. These blacksmiths, weavers, glassblowers, quilters and others are not only involved in very meaningful earthy endeavors, but each is also creating one of a kind beauty, in an era of mechanized sameness.

That I am using a Pentax 645D , HP workstation, HP Designjet printer, and other high-tech devices to capture and tell their stories is not a contradiction. Because their story – and mine – are not about the tools.

And that’s all technology is… a tool.

Technology versus art is an age-old debate. Back in the 1830s, when photography was invented, it was a curiosity, a marvel, but, folks asserted, it certainly wasn’t an art. Art was done with paint brushes or charcoal or clay.

Of course, photographers, such as Henri Cartier-Bresson, Ansel Adams, Margaret Bourke-White, Annie Leibowitz and Sabastio Selgado, proved the naysayers wrong. We now have museums devoted solely to photography (such as the beautiful Annenberg Space for Photography in LA).

Then came the digital age, and we heard it all again. Photography is film-based. Sure, digital technology is interesting, they said, but it’ll never give you the same granular texture, specular heights and depths, or human feeling that film-based photography can.

Digital technology has now matured, and great fine art is being produced using the newest of the newfangled devices.

But that’s not the point.

It isn’t the camera, it’s the photographer. It isn’t the medium, it’s the artist. Beauty is produced by human beings using whatever tools they can lay their hands on (be it a camera or a potter’s wheel), communicating something that touches us emotionally, aesthetically.

That isn’t to say that technology is irrelevant to art. It has never been irrelevant. Throughout history, major changes in art were spurred by new technologies, such as the improved oil paint colors that enabled artistic experimentation and breakthroughs in the Renaissance (another important period of great technological growth and innovation).

When I was shooting film, my favorite lens for my Leica M4s was a SuperAngulon 21mm. I valued and used its delicious balance of superlative optics and fascinating wide-angle distortion. Shooting with that lens enabled me to make choices about how I would capture and share what I saw, using a particular and very personal perspective. The Super Angulon gave me creative options and challenged me to put more and more of myself (my vision and spirit, that is) into my pictures. Similarly, I would spend many hours in my darkroom, breathing in all those chemical fumes while manipulating my photos, bringing out the details that mattered the most to me, subduing those that distracted from what I wanted the photos to say.

Now that I shoot digitally, Adobe Lightroom and Photoshop are my darkroom, with only a handful of add-ons such as Silver Efex Pro. I need high-powered technology for processing my large images (up to 1 gigabyte each), and I was relieved when I upgraded to a state-of-the-art, loaded-for-bear 64-bit, Quad Core HP workstation. Then, when HP provided a 44″ giclée Designjet Photo Printer for my exhibition prints, I discovered new creative challenges and opportunities to express my personal vision for my American Hands photos. For several weeks before the installation of each of my exhibits, I found myself staying up all hours of the day and night (often sleeping only three hours out of each day), exploring how far I could push myself creatively.

And, to a large degree, it was the new technology in my studio that enabled that burst of round-the-clock creative energy.

No, I see no contradiction between being a recognized expert in digital photo technology, and a photographer who focuses on people engaged in traditional crafts. In fact, it is my personal involvement in using the technology (and pushing it to its limits for my creative purposes) that makes me a good, effective tech critic. I have no patience for hardware or software that fails by becoming so evident and intrusive that it gets in my way. Good technology is transparent, invisible, putting up no obstacles to achieving whatever it is you want with the tools it provides.