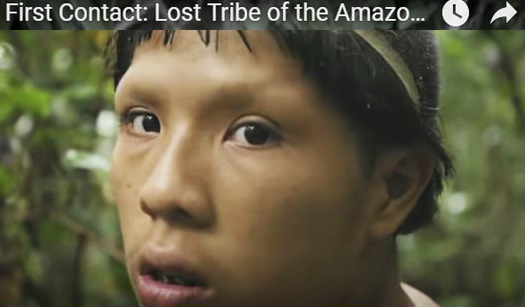 Today, while doing my morning exercises, I clicked through Netflix and ended up watching “First Contact: Lost Tribe of the Amazon.” It’s a fascinating documentary about an anthropologist’s first interaction with one of the isolated tribes of the region. But my interest wasn’t only intellectual. I was curious about how the tribe Daniel and I had once met might have fared. (To read a bit about our experience in the Amazon, please go to a lighthearted piece I did for Lawrence Schoen’s Eating Authors.)

According to “First Contact,” an Amazon region of about 30,000 square miles (spread across the border between Brazil and Peru) is home to the majority of “uncontacted” people in the planet. Uncontacted means that we have no records of any interaction between them and the outside modern world. However, many (if not most) have been watching us for a long time. In fact, it’s postulated that their ancestors ran into the dense jungle to escape the horrors and devastation of previous encounters. For some, it started way back in the early 19th century, when rubber plantations plowed through the area, destroying entire tribes through slavery, illness and wholesale slaughter. It’s a dark piece of history, repeated all over the world when outsiders “discovered” new lands populated by indigenous people.

Daniel’s and my encounter was much gentler and probably whitewashed by the local officials. After all, the Peruvian representatives needed to keep our small bevy of journalists in a happy state of mind. Nor did we have much time to dig deeper, since we arrived on Friday and flew home on Monday. It was classic parachute journalism, with our story intended for readers of the Sunday Philadelphia Inquirer’s Travel section.

But that doesn’t mean I haven’t been haunted over the decades by what I saw (and what I didn’t see). No doubt this and other encounters have influenced me deeply, including having a major impact on the fiction I write. I now view my memories of that weekend in the Amazon through a much more informed filter – one that recognizes how little I know, and how much I hunger to understand.

As a result, I’m in the throes of writing an essay on the nature of alienness, which has nothing to do with bare breasts, unknown languages or strange environments. Being alien relates to the fundamentally different preconceptions and points of reference that make the borderland between people so dangerous and unpredictable. At least, that’s the thesis underlying my essay in progress. Now to see where it takes me.