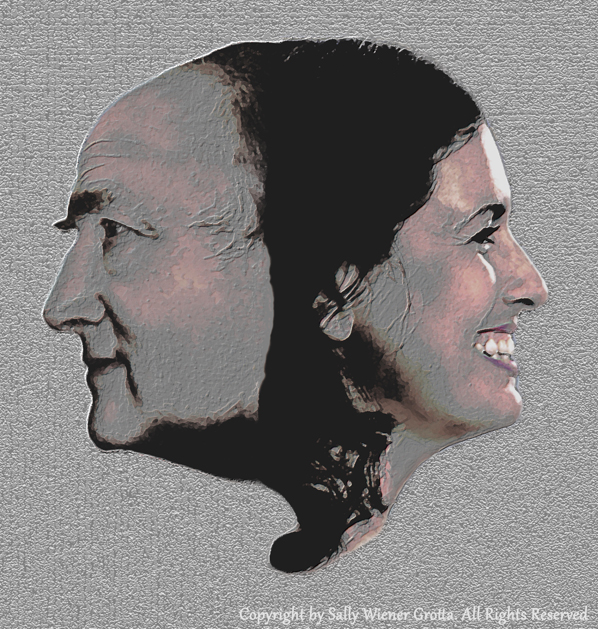 Memories and dreams
Life intangible
Life imagined
What we hold
In our minds
In our hearts
As we stand Janus-like
At the cusp of the year.

Life lived back to back
Supportive, protective
Opening ourselves
To beyond the now
Remembering the past
Stepping into the future
To whatever comes
Together.

How appropriate that the symbol of the new year is Janus, the Roman god of beginnings, transitions and endings, of time past and to come. We imagine that he will stand at once more at the stroke of midnight as 2013 ends and 2014 begins, with one face gazing into what has come before, while the other focuses, dreamy eyed, onto the future.

Looking back on the past twelve months of our lives, the view is so very different from what it was as we experienced it. Sally likes to say that the defining aspect of our personal and professional world is creative chaos. She has that right. Every morning we’re awaken by Watson, our Golden Retriever, to a new adventure, never knowing what will happen that day, or how much of our ever-growing ToDo list will get done. At night, as we fall into our bed, we are certain that we got very little done.

Yet, as we gaze Janus-like at 2013, we are surprised at all that has happened in the long run, as we simply did our best to live each day fully. Here are some of the highlights of 2013 in the Wiener Grotta household.

One of our proudest moments of the year was when our Dad, Noel J. Wiener, was honored for his service in WWII, as the last remaining officer of SHAEFheadquarters. That was General Eisenhower’s headquarters in Europe. At 98 years old, Dad can still live on his own in his Philadelphia apartment. But the three of us prefer the fun we have when we’re together. So he is often with us, helping with research for our various projects, copy editing our work, and giving Sally a good run for her money with some wicked high-scoring games of Scrabble. 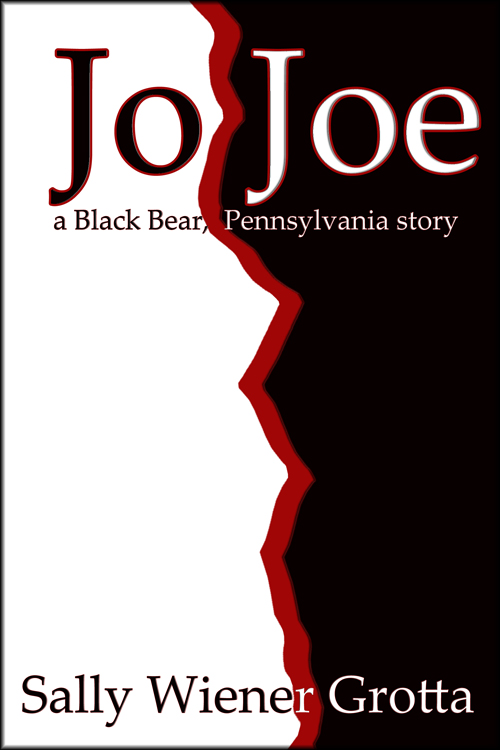 From the beginning – starting with that very first blind date all those years ago – the two of us have always enjoyed the stimulation of sharing and building on each other’s ideas. So, it should be no surprise that we have entered into what we believe is a unique literary folie à deux. Or, if you prefer more 21st century lingo, our own personal virtual reality. We are dipping into the same pool of invented characters and locales, building on each other’s interpretations, to create a series of very separate stories and novels that will (as our book jacket copies say) “eventually paint a full picture of the diversity of life and relationships in a small mountain village.”

Black Bear, Pennsylvania started with Daniel’s novella Honor. For her novel Jo Joe, Sally appropriated Jeff Smith (the protagonist of Honor) and AH, Jeff’s father-in-law, as key secondary characters, while extending the village in all directions. (Both books are getting great reviews; Jo Joe has been adopted into the Jewish Book Council Network and has lead to some very interesting new kinds of speaking engagements for Sally.)

Stay tuned for more stories about the town that lives – and continues to grow – in our minds and now in our books. For instance, Daniel has finished the second draft of a Young Adult novel Adam V which is set on the periphery of Black Bear, and while awaiting Sally’s edit of that book, he has turned immediately to writing Black Bear One about the adventures (and misadventures) of the town’s volunteer ambulance corps.

At this point, Sally’s American Hands narrative portrait project has received over three dozen grants and is now a 501(c)3 non-profit organization under the fiscal sponsorship of the Artspire Program of the New York Foundation for the Arts (one of the most respected arts organizations in the country). Even more gratifying is how American Hands has hit a resonant chord with the public, which is fascinated with and inspired by Sally’s pictures and stories about artisans who are keeping the traditional trades alive (such as a blacksmith, bookbinder, spinner, etc.) So far, over 300,000 individuals have personally attended an American Hands exhibit. Additional photo shoots, exhibits and lectures are scheduled through 2015, with more under discussion. Sally welcomes your suggestions for exhibit and lecture venues, other artisans she should consider photographing, and your advice and help in keeping this project alive.

OUR FORAYS INTO NEW MEDIA

We’ve been having fun experimenting with some of the new media opportunities that have evolved. We have two separate online shows that are currently using Google Hangout and YouTube technology. (However, we’re looking into other possible, higher quality production venues for them.) For our Arts & Letters Show, we are interviewing fellow writers, photographers, artists, thinkers – anyone who fascinates us. In addition, we sometimes do video book reviews, share insights into subjects of interest (such as how to get grants), etc.

Of course, we’re also intrigued by the technology that enables our work, and have long been involved in testing and critiquing hardware, software, high tech services, creative workflows, etc. So, it was inevitable that we’d also develop our Team Grotta Tech Talk Show.

Not to be left behind, Sally has two YouTube Channels, too: a personal one and another focused the stories, pictures and insights of her American Hands project.

And then there are all those other videos out there. For instance, the Wall Street Journal was only the most recent company to send a crew to tape Sally at work in her studio and record her opinions on an enormous new computer monitor.

EVERYTHING OLD IS NEW AGAIN

Naturally, much of what we’ve done over the past year is simply an outgrowth of (or similar to) what came before:

After a hiatus of several years, Daniel has rejoined the National Book Critics Circle, and is getting back into regular book reviewing. (He initially joined the first year of the NBCC’s existence).
We continue to do testing, reviewing, white papers, product analyses, etc. of photographic/imaging, publishing and other technologies in our DigitalBenchmarks Lab, for various magazines and corporate clients.
Sally has opened up her studio for occasional Master Classes
LOOKING FORWARD

And so we stand at the beginning of a new year, once more. What will 2014 hold for us? It’s anyone’s guess. But we have hopes and dreams and some plans that, like those items on our ToDo lists, may actually get done, despite daily crises and distractions.

Of course, highest on our list is our plan to spend more time with our family and friends. That’s what makes all this worthwhile. And more walks along our stream with Watson. And more time just breathing in the delicious air of our Pocono Mountains.

A couple of things we know will happen. Sally’s novel The Winter Boy is scheduled to be published. Daniel will be working on a couple of new projects for high tech clients in January and February. Dad will continue to challenge Sally’s vocabulary with new Scrabble words which he may or may not have made up. And Watson will wake us up every morning with his tail wagging, happy to see us alive. We suppose that’s what keeps us on track and ready to face whatever the day brings, as long as we can face it together.

We hope 2014 brings you and yours good adventures and lots of smiles along the way.