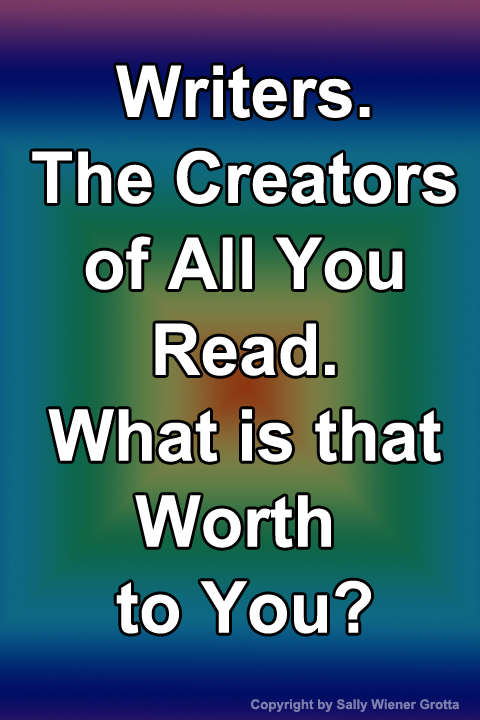 Last week, the head of our village library called, to inform us that they were putting together a display of local authors’ work and would love to include Daniel and me as part of it. Of course, I was very pleased. Then came the kicker; although she didn’t come right out and say it, for the privilege of participating, they expected us to donate a number of our books to the library.

Now, don’t get me wrong. We fully support our small local library, and have donated (and will continue to do so) time, money and other goods to them through the years. But I have been told by a board member that the Friends of the Library had recently raised a nice chunk of change to acquire new books. However, it appears that they had also decided that local authors should donate their books rather than having the library buy them. After all, we’re only *local* authors. (At least, that’s what I heard in my mind, when she said she would like us to donate copies of all our books for their display.)

I offered to lend the library our books for the display, and suggested that they might want to buy copies from our publishers or distributors should their patrons be interested in borrowing them.

After I hung up, I wondered if I had overreacted — so much so that I actually drove to the library with a couple our novels and Daniel’s biography of J.R.R. Tolkien in hand, to donate them for the display, and to apologize for my initial refusal. But because they were closed, I called a friend of mine who was on the board, to ask for the librarian’s phone number or email so I could apologize to her. Instead of giving me that information, he was angry that she should be so insensitive as to ask authors to donate their books when, as far as he is concerned, the library has the recently raised funds to purchase them. In fact, he said that he had resigned from the board over this matter. (And, no, he isn’t an author, nor does he do anything related to the arts.)

His sobering perspective on the matter made me pause. Perhaps, I began to think, I should be glad that the library was closed; it gave me the weekend to consider how I really wanted to handle their tacit insistence on my donating books to them, rather than simply buying them outright. Maybe my initial refusal was appropriate, after all.

Then another friend offered an opposite viewpoint. She suggested that maybe the librarian simply didn’t really understand that authors have to pay for their own books. (By contract, most publishers provide a specific number of copies to the author as part of their payment, typically, between 10 and 20 copies. Beyond that number, the author pays for every book, albeit at a wholesale price. So, not only does the donation of a book from an author represent the loss of royalty income, it involves a very real out-of-pocket cost.) But don’t librarians know all about that, and if so, why did our village librarian ask us to personally subsidize the donation of our books rather than buy them from the publisher or distributor?

So I spent the weekend thinking about her phone call and my immediate reaction, and then my delayed vacillation between indignation and regret. What was it that bothered me so much about the phone call, when I strongly believe in supporting my library? Here are some of my thoughts.

Part of me thinks that the librarian’s request for freebies was in large part due to a lack of understanding that writing is a job, not a hobby or avocation. Unfortunately, a common practice in this Internet era is to ask professional authors and journalists to write for nothing or next to nothing. Instead of earning dollars for words, many sites promise that your unpaid contribution will earn you invaluable “exposure” — in other words, allowing a website to publish your work for free will expose it to a large number of readers, which somehow will miraculously generate income via paid assignments, lecture fees, publishing contracts, and other down-the-road opportunities. Alas, that rarely, if ever happens.

Yes, I love to write; it is my driving passion. But that doesn’t diminish the value of my work any more than a doctor who loves to heal deserves less pay than one who does it simply as a business. Authors deserve the same courtesy (and remuneration) as any professional. Without payment for my work, for my words, I can’t earn a living. Nor could I remain a writer, no matter how much I love sitting down and pouring out thoughts, ideas and stories from my imagination.

On a more personal note, to have my own local library (and my friends) not value my work enough to want to support it by spending a few dollars is hurtful. Well, it’s all very personal when others devalue or do not appreciate what you do for a living.

Then, this morning, Daniel sent me the link to an article in the New York Times on the subject: Slaves of the Internet, Unite! by Tim Kreider. I must admit that it was reassuring to see another writer upset about the perception that writers don’t really need to need to be paid, don’t need to earn a living.

Writers create everything that you read. We work long hours, researching, crafting, writing and rewriting, until our stories flow, are a pleasure to read, have meaning — so that they might inspire, touch hearts, educate, inform, enrich minds and lives. We challenge people to look beyond the self, to consider new ideas, to explore the “what if” and “what could be.” And we provide important information that makes it possible for people to live well, learn skills that will further their careers, understand and purchase the best products for their needs and budgets, make personal and professional decisions, develop relationships, and understand each other. If writers can’t make a living, there simply won’t be any informative, interesting, enjoyable, authoritative, professionally written articles, reviews, books, texts, humor columns, social commentary, news stories, etc. Would your life be poorer then? Undoubtedly.

And, yes, all those thoughts and emotions poured out of me because of a simple phone call that may or may not have been offensive, or genuinely neighborly.

What do you think? Did I overreact? Should I apologize to the librarian? Should I print out that Times article decrying the pressure to write for free and send it to the library board? Or should I simply ignore the whole controversy and move on? What have you done in a similar situation?