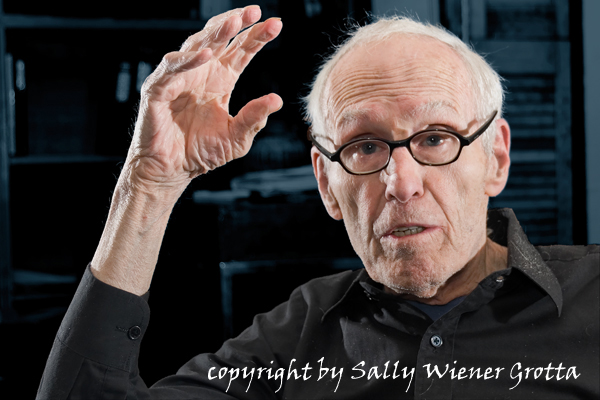 Today, as Daniel and I drove home from Philadelphia, we were listening to NPR’s “All Things Considered,” when they announced that someone from the literary world died — not a writer but one of the most important publishers of our time.

I knew before they said any name that, sadly, one of my heroes – Barney Rosset – had passed away.

I first met Barney Rosset whenI photographed him for The Wordsmiths Project. (I was creating interpretive portraits of individuals behind the scenes in publishing. I originally designed The Wordsmith Project as an awareness raiser – and a hoped-for fund-raiser — for the Writers Emergency Fund.)

Barney was on my wish list to be included in the project from the very beginning. The former publisher of Grove Press and Evergreen Review, he fought the censors for all of us, while expanding the American literary lanscape with such (now) classics as Miller’s “Tropic of Cancer” and Lawrence’s “Lady Chatterley’s Lover.”

Hyehwa Civetta, a friend of Barney’s, arranged the meeting. But she warned that I would be lucky if he put up with me for fifteen minutes. So, she advised me to get my photos of him quickly and be ready to be booted out at any time.

Happily, Barney took a liking to me. (He was, I understand, always a ladies’ man.) So, for over three hours, I took pictures of him. And he shared with me photographs he had taken during the Spanish Civil War, told me fascinating anecdotes from his remarkable life and asked me questions about my writing and photography. With a mischievous twinkle in his eye, he proudly pointed out the yards of bookshelves filled with binders, all containing material the government had gathered about him, which he had obtained through the Freedom of Information provision. They documented his struggles with the censors and his championing of our First Amendment Rights.

In part because of Barney Rosset, we can now read whatever we want.

Because of Barney Rosset, I will always have the memory of a wonderful afternoon, being regaled by one of my heroes.